Since May 2012 there have been over 125.000 page views. The popularity of the website has grown month-on-month and there are visitors from more than 80 different countries. AOTI hopes to inspire many artists and art lovers.

Huichol yarn painting is a traditional artistic technique that is used for recording dreams, visions, myths, and the innermost personal prayers of the artists. Because the Huichol language is non-written, these story boards are used to express the beauty and wisdom of the ancient Huichol cultural tradition. Huichol artists can be thought of as modern day scribes.

The Huichols use smaller version of these paintings as offerings to the many gods and goddesses that reign over their isolated homeland in the Sierra Madre mountain range in Mexico.

Yarn paintings originate from votive objects the Huichols create as ceremonial offerings. The small wax and yarn votive objects are made as prayers to depict the desires of the people and their families. After the ceremonies they are taken to far off sacred places and left for the gods and goddesses.

The larger paintings, made by Huichol artists for sale, utilize the same technique for placing strands of yarn onto a thin surface of beeswax mixed with pine resin that has been spread onto a wooden board. It is a meticulous and time consuming art form that may be a successor to the featherworking techniques of the Huichol ancestors, the Aztecs. 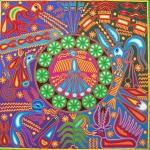 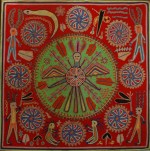 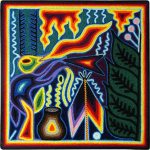 END_OF_DOCUMENT_TOKEN_TO_BE_REPLACED

These beautiful, one-of-a-kind beaded masks where made by pressing tiny glass beads into natural beeswax spread over a paper-mache form. Bead art is made in limited quantities by the Huichol and Tepehuano Indians of southwestern Mexico. Click here for additional information on the Huichol people and how this art was made.

END_OF_DOCUMENT_TOKEN_TO_BE_REPLACED

Spirituality that will move you

Mexican culture meets pop-culture icon:  “El  Vochol” Volkswagen Beetle. The car will be at the Washington D.C. museum until May 6, when it will continue on its international tour. After the tour, the car will be sold or auctioned, with proceeds going to the Association of Friends of the Museum of Popular Art in Mexico City to help safeguard and promote the work of Mexican artisans.

The Consulate General of Mexico in Denver and the Mexican Cultural Center, in coordination with The Sebastian Hotel, are hosting an exhibition of Huichol art that will be open for the public beginning today at the Sebastian Hotel in Vail, Colorado.

The exhibition offers the viewer an opportunity to experience one of the most important and unique cultures of Mexico. The Huichol, also known as Wirraritari or Wirrarika, they have managed to preserve their way of life and maintain a spiritual relationship with the universe through complex rituals and ceremonies.

It was during the 17th century that under the influence of Christianity, the Huichol people adopted a dual faith, pagan and Christian. These beliefs remain to this day and are linked both to nature and their ancestors. END_OF_DOCUMENT_TOKEN_TO_BE_REPLACED

London-based Catherine Martin of Our Exquisite Corpse traveled to Mexico and discovered the beautiful beadwork of the Huichol. She worked with them to create these stunning beaded clay skulls at the time of  ‘dia de los muertos’, the day of the dead.

When most people think about Mexico they never think about Africa, or natives of African descent. However there are areas in Mexico that have a large black population.

Black heritage in Mexico is not only isolated to Veracruz and Costa Chica. In the 1500 Spaniards brought Africans into Mexico because the Indians were dying. By the mid-1600, there were more than 15000 blacks and mulattos in Mexico. The races in Mexico mixed, thus making Mexico a nation of mestizos (mixed peoples).

This work of art showing a Huichol indian playing a drum has something African about it, it almost looks like it has been influenced by African tribal art. A reliquary figure covered with beads and Huichol symbolism.

A rare set of Mexican furniture from the Huichol tribe of central-west Mexico, comprising a pair of chairs, a table and a stool or side table. Each piece composed of a base of wooden strips with leather seats and tops and cane backs, the vellum with traces of brightly coloured painted images.

END_OF_DOCUMENT_TOKEN_TO_BE_REPLACED

For the Huichol people of Mexico, the “magical deer” represents both the power of maize to sustain the body and of the peyote cactus to feed and enlighten the spirit. Animals such as the eagle, jaguar, serpent and deer are of great importance to the Mexican indigenous cultures. For each group, however, one of these animals is of special significance and confers some of its qualities to the tribe. 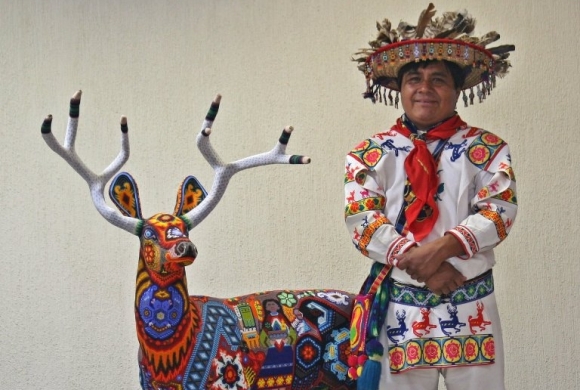 For the Huichol it is the deer that holds this intimate role. The character of the Huichol tends to be light, flexible and humorous. They have avoided open warfare, neither fighting against the Spanish nor Mexican governments, but holding to their own traditions. The Huichol hunt and sacrifice deer in their ceremonies. They make offerings to the Deer of the Maize to care for their crops, and to the Deer of the Peyote to bring them spiritual guidance and artistic inspiration.

All images, unless otherwise noted, were taken from the Internet and are assumed to be in the public domain. Whenever possible credit will be given to the source. In the event that there is still a problem or error with copyrighted material, the break of the copyright is unintentional and the material will be removed immediately upon request.
Loading Comments...